The basic premise is that the Greek Goddess Aphrodite has secretly recruited 5 schoolgirls on earth to be her Venus Warriors. They are bestowed supernatural powers whenever they transform. There is Venus Pink, Venus Blue, Venus Green, Venus Red, and Venus Purple. They will be earth's only defense against a perverted force known as the Inma Empire. The leader of the Inma Empire is Necros, daughter of the Greek God Apollo (who in this series is the God of Lust). The Inma seek to resurrect Apollo and dominate the world, turning it into a perverted sexual empire.

Hikari is Venus Pink, also the leader of the Venus 5. At the beginning of the story, she learns of her destiny from a talking cat name Buccha. He is a servant of Aphrodite and is sent to earth to aid and instruct the Venus 5. Unfortunately, the girls do not know that they have been selected to be Venus Warriors, and Buccha must find them and inform them of their secret identities. Every Venus warrior has a secret Venus mark on her body, a symbol that marks them as one of the Venus 5.

The series is predominated by strong sexual themes, nudity, and gratuitous sex, but has mild violence.

From the darkness of the past, Necros and the Lords of their corrupt Inma Empire have been reborn. She plans to awaken the god Apollo from his ten thousand years sleep to receive her reward, unlimited power. But five 19 years old sexy warriors are ready to face it: The Venus 5, Venus holy warriors and servants of the Goddess Aphrodite. These five heroines are the only defense against the evil forces of Necros.

2- Labyrinth of the Inma

After their last battle, the 19 years girls of the Venus 5 team await the next move of the perverted Inma Empire. Necros reappears as the guardian of an exclusive gallery. She and her demonic assistants are gathering a collection of Greek and Roman artifacts. Can Venus Pink and Venus Blue stop her before she acquires the wealth of the Financial Group Gold Star?

Four beauty girls sneak into the hideout of ’Teaching of Golden Venus’ when the girls’ ’precious ones’ are brainwashed by this evil religious organization， and what will they find there!? It’s Golden Venus the Ultimate Evil， and Very Mysterious Silver Venus! Scheming beastly goddesses confront the four girls fighting with the Holy Power. With its boldly-conceived script， ’Venus Ranger’ devotes nearly two-thirds of the story to the action sequences， shot with the audacious idea of using NO CGI whatever. It’s the antithesis to our CGI-infected time， great collaboration of the actions from good， old Showa Period and the children of new Heisei Generations!! 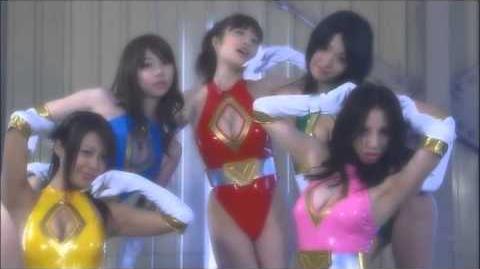 Retrieved from "https://magical-girl-mahou-shoujo.fandom.com/wiki/Venus_5?oldid=126521"
Community content is available under CC-BY-SA unless otherwise noted.