Takenoko-chan is a Magical Girl anime that only exists inside the "Peguin Musume Heart" anime series. Takenoko-chan is able to transform into a Super Heroine for protecting a holy place. She has to fight against the evil Bamboo King, but in the end of the story, she is eaten by an old man. A sequel called "Takenoko-chan R" is mentioned, but nothing is known about it.

In the first episode we can see that the protagonist Sakura is obsessed with manga and anime. She is transfered to the Kujira's school and instantly becomes attracted to her due to her likeness to Takenoko, a magical girl anime character Sakura watches. Sakura tells Kurija all the story of Takenoko-chan and decides to compete against her for school council president, forcing her to wear Takenoko cosplay if she loses. 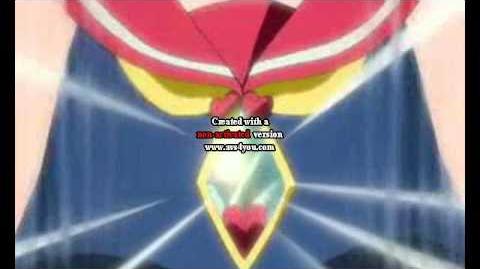 Retrieved from "https://magical-girl-mahou-shoujo.fandom.com/wiki/Takenoko-chan?oldid=45368"
Community content is available under CC-BY-SA unless otherwise noted.