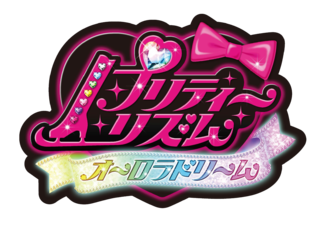 The Prism Show is an all-new kind of ice skating show that requires its participants to be figure skaters, models, and singers all at the same time. Prism Stars are performers on the new popular ice show, Prism Show. They are superidols whose techniques, singing and fashion sense are a cut above all others. Aira and Rhythm are two girls who both dream of becoming the best, the Prism Queen. They'll have to train hard and overcome both their quarrels with each other and their blossoming interest in boys if they want to achieve their dream. However, the road to success is bumpy.

Three years have passed since the events of Aurora Dream... At Pretty Top, a new generation of girls dreaming of being Prism Stars have endeavored through their training. One day, Ayami, Karin and Reina find themselves on the same stage as their predecessors, when Mia Ageha suddenly jumps up on stage and demands to challenge the legendary Prism Show unit MARs. To keep this challenge, the 4 girls are sent to become a new Prism Show unit, Prizmmy☆. As the girls waver and then jump back up, they deepen their friendship and aim for their debut together. To add to it all, 5 teenage girls from Korea, named Somin, Shiyoon, Haein, Chaekyung and Jae Eun (who are the PURETTY), appear as a rival group and have come from abroad to Japan to study at Pretty Top to have their debut as well. In order to meet their future, the girls stand on the stage, and the show starts. 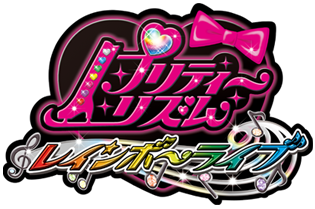 Naru Ayase is an 8th grader who can see the colors of music when she listens to it. For Naru, who is extremely good at decorating, becoming the owner of a shop like Dear Crown was her dream. One day, she finds out that the manager of a newly-opened shop is recruiting middle school girls who can do Prism Dance, and immediately applies. Naru begins to Prism Dance at the audition, and an aura she's never experienced spreads out in front of her. At that moment, a mysterious girl named Rinne asks her if she can see "rainbow music".

Young girl Laala is a Prism Show student, and is aiming to become an idol. She learns the way to shine from previous Prism Stars, including Aira Harune, Mia Ageha, and Naru Ayase. Lala looks back to the past with her mentors to their many experiences and Prism Shows.

Residents of the Prism World Momo and Penguin-sensei work together to introduce various Prism Shows throughout the history of , , and . Within the many Prism Shows performed by Aira, Mia, Naru and their friends, only ten rank on top.

PriPara (Prism Paradise) is the successor to the popular Pretty Rhythm series. The new anime is set in the Pri-Para world, filled with girls' dreams and yearnings for fashion, dance, and music. Every day, there are auditions that send top idols to worldwide fame on television and online. Laala Manaka is a 5th-grader at Paprika Academy. Like most girls, she admires the world of PriPara, a sport that tests idol girls on song, dance, and fashion. Unfortunately for her, her school does not allow elementary school students to participate in PriPara. However, through miraculous circumstances, Laala passes the audition to become a PriPara idol and make her first entrance into the world of Pri-Para, where she will make her debut. The main characters are Laala, Mirei, and Sophie,and are later joined by Shion,Dorothy,and Leona. 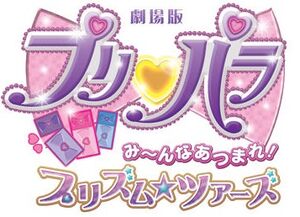 Aira, Mia, Naru, and Lala introduce themselves as if it were an episode of Pretty Rhythm All-Star Selection. Lala thanks them for their help and offers to teach them about the world of PriPara. Everyone agrees, until Mia points out that this isn’t All-Star Selection: this is the PriPara movie. The PriPara characters then announce that the movie is beginning.

Meganee and Meganii address an audience of various minor Pretty Rhythm characters and tells them that while recording devices are not allowed, cheering for idols and using glow sticks is permitted. Meganee and Meganii introduce performances of Marble Make Up A-Ha-Ha!, Solar Flare Sherbert, Pretty Prism Paradise, and No D&D Code. Lala, Mirei, Sophy, Shion, Dorothy, and Leona then appear on the train and Meganee proposes a contest between SoLaMi Smile and Dressing Pafe. They perform Happy Pa Lucky and Change My World. As the results of the contest are being tabulated, the screen glitches out and Falulu appears, performing 0-week old. After her performance, her pedestal rises into the stars, causing an error in the Prism Tour system. Falulu encounters Rinne from Pretty Rhythm Rainbow Live and as they touch, a bright light engulfs the screen and the Prism Tour’s destination abruptly changes from PriPara Town to the Mascot Graveyard.

As the Prism Tour train hurtles into the Mascot Graveyard, Cosmo Hojou calls out to them and performs Your 100% Life. The PriPara characters exit the train and ask Cosmo where they are. Cosmo says she doesn’t know and asks who they are, confusing the group. Cosmo offers the group Prism Stones which the group uses to enter the Prism Show world, where they meet Aira, Mia, and Naru, who introduce themselves as Prism Stars and offers to teach the group about Prism Shows. The group are given a choice of four doors to go through. At this point, the movie diverges into one of 4 routes.

Lala runs toward door number 1, but slips on a banana peel, sending her into the scary-looking fourth door. Meganii introduces the boy group from Aurora Dream and Dear My Future, Callings, as they perform Tinker Bell's Love. Meganii introduces Rainbow Live's Hiro and Kazuki performing Boy Meets Girl and Kazuki's performance of Freedom. He briefly discusses the Prism King Cup and then tells the group about the formation of Over the Rainbow as they perform Athletic Core. Hiro and Kouji perform Pride, and the route concludes with Over the Rainbow's performance of Flavor as Meganii says the group is not done yet.

The PriPara characters come back out of the door they entered, but the Prism Show World is about to collapse. They are falling into the Graveyard when Rinne appears, telling them to perform using the Prism Stones they received earlier to restore the Prism World’s sparkle. They perform Realize while incorporating Prism Jumps, Prism Acts, and Prism Lives. Aira, Mia, and Naru thank the group for their help and perform Make It. Prism World is restored and the PriPara characters are able to leave. After the tour is over, the group runs into Cosmo, who is confused when they ask if she was on the tour with them. Cosmo explains that she went on the tour a long time ago when she was deciding whether or not to become a designer. The tour helped inspire her to create the cyalume coords that are used in PriPara. Lala decides that the group should go on the tour again, only to realize that Kuma and Usagi are nowhere to be found. The group slowly realizes that they’re still in the Mascot Graveyard, and the movie ends with Kuma and Usagi in the Graveyard begging for help.

After the credits, Aroma and Mikan appear,  promising the audience that they will meet again in PriPara Town. 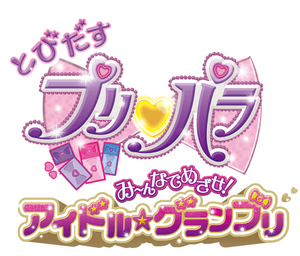 English Title:Fly Out, PriPara: Aim for it with Everyone! Idol☆Grand Prix 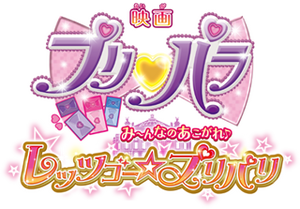