Magic Knight Rayearth focuses on three eighth-grade girls: tomboyish and headstrong Hikaru Shidou (獅堂 光 Shidō Hikaru); the quick-tempered only child Umi Ryuuzaki (龍咲 海 Ryūzaki Umi); and intelligent Fuu Hououji (鳳凰寺 風 Hōōji Fū). While on a field trip to the Tokyo Tower with their respective schools, the girls find themselves drawn into another world, Cephiro. There they learn that Cephiro is influenced by one's will and that the Pillar maintains Cephiro through prayer. The girls are then tasked with rescuing the current Pillar, Princess Emeraude, from her abductor, the high priest and antagonist Zagato, after which they will be returned to Tokyo.

Guided by the creature Mokona on their quest, the girls discover their respective element-based magic and awaken the three Rune-Gods (魔神 Mashin), who can take the form of giant robots. As the girls progress on their journey, they overcome their differences, learning how to work together and accept each other as friends.

After the girls find and destroy Zagato, they finally reach Emeraude, but they learn that she had fallen in love with Zagato, hindering her ability to pray solely for Cephiro's well-being, and imprisoned herself as a result. Feeling responsible for her actions, she summoned the Magic Knights to kill her, as no one from Cephiro could harm the Pillar. Her dark side then takes over, seeking to destroy the Magic Knights for killing her love. After a short defensive fight against Princess Emeraude, the Magic Knights have no choice but to kill her. They then find themselves transported back to Tokyo.

The second part of the series deals with the complications caused by Princess Emeraude's death. Set a year later, it opens with the three protagonists struggling with their guilt and despair over their role in her death. Meeting again at Tokyo Tower, they find themselves transported mysteriously to Cephiro again, and discover that only a single piece of Cephiro remains, which holds a castle where the survivors gather to take refuge. With the Pillar gone, Cephiro is, for the most part, defenseless, and the girls are saddened to learn that a new Pillar must be chosen by the Pillar system before the whole planet is destroyed. Three warring planets begin their attempts to conquer Cephiro: Autozam, a technologically advanced world which intends to use the Pillar system to remove the pollution in its air; Fahren, whose childish ruler Lady Aska plans to turn it into a world of her whims; and Chizeta, an overpopulated world whose sibling rulers Tatra and Tarta see Cephiro as a potential colony.

As the Magic Knights help defend the castle, they each agree that the fate of the planet should not be the responsibility of only one person which, like Princess Emeraude, effectively prevents that person from ever being able to live and love freely. What's more, they are certain that when a new Pillar in chosen, something may eventually hinder them from praying solely for Cephiro's well-being, cause them to summon new Magic Knights to kill them, and bring Cephiro to near-destruction again until a new pillar is chosen, much like Emeraude, which would cause the cycle of events to continue endlessly. Some of the survivors believe this idea as well, particularly Lantis, a powerful magic swordsman and Zagato's younger brother,

who wishes to end the Pillar system for those reasons.

Eventually, Mokona narrows the candidates down to two: Hikaru and the sickly Eagle Vision of Autozam, who is friends with Lantis and, as such, wishes to end the Pillar system for him with his eternal sleep. As the two undergo the test to become the new Pillar, Mokona reveals itself to be the creator of Cephiro and its laws, which it had created after sadly witnessing the violence and destructive nature of the people on its earlier creation, Earth. It was responsible for bringing the three girls back to Cephiro. In the end, Hikaru becomes the new Pillar of Cephiro, and brings Eagle Vision back to Cephiro with the help of Fuu and Umi, against Mokona's insistence that only one may return. Hikaru then rebels against the Pillar system, decreeing once and for all that the fate of the planet should not be the responsibility of one person. Mokona accepts their decision and leaves with the three Mashin.

A three-part OVA was rel 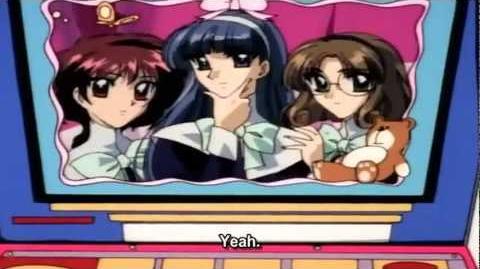 eased in Japan a few years after the end of the manga and anime. The OVA was renamed simply Rayearth, and its story was quite different from the original. The characters are all 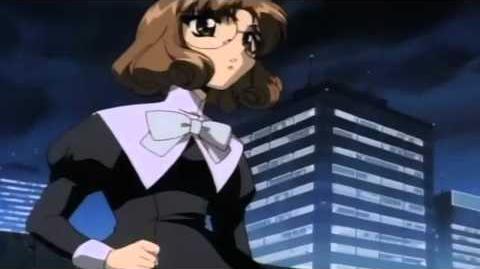 the same, but the relationships, places and events changed radically. Here, we find that Hikaru, Umi and Fuu are already friends who go to the same school and will soon be leaving for high school. Suddenly, Mokona (now a strange fairy creature) appears before them. At the same time, strange monsters and wizards start to appear in the city of Tokyo. One of them is 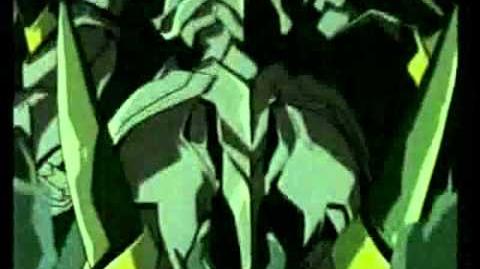 Clef, who tries to guide the three girls in order to let them become the Magic Knights, awaken their Mashin and fight against the evil wizards from Cephiro, who are trying to invade the human world.

In this version, Ferio, who is a sourcerer under Princess Emerude's command is not her brother, instead Eagle Vision is, who's also the main antagonist after he tricked Zagato to commit suicide in order to bring upon a false balance to Cephiro. He's ties to Autozam are non-exsistent in this version, as he is a citizen of Cephiro from the start. He would put a spell on Emeraude to convince her that Zagato is still alive, so that the sourcerers of Cephiro can continue to exist on Earth as the two worlds would soon merge and each sourcerer would battle against the Magic Knights.

Lantis is also introduced right away as being an ally to the Magic Knights and against Eagle's plans. The only other characters that are in the OVA are Ascot and Alcyone. None of the other characters are featured.